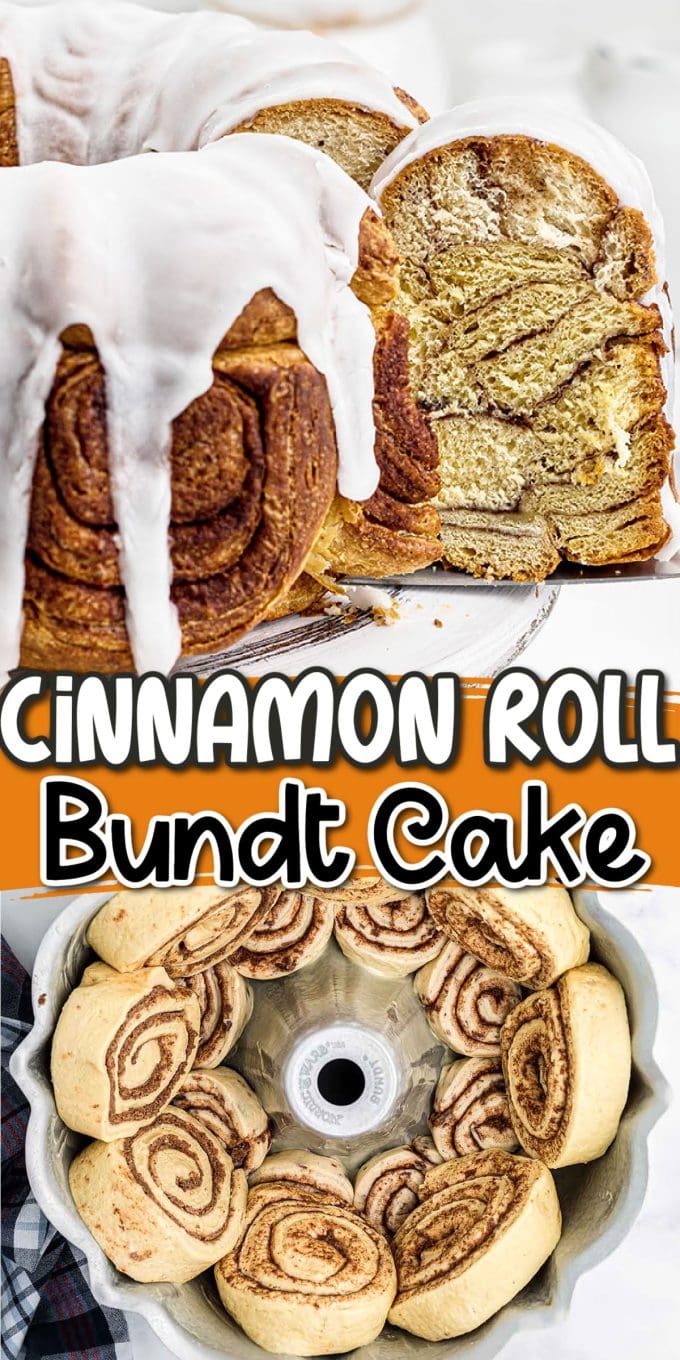 Cinnamon Roll Bundt Cake is the easiest way to bake a batch of sweet and sticky cinnamon rolls in the form of a cake. This simple shortcut recipe is quickly prepared with packaged cinnamon rolls arranged in a pan, then drizzled with a homemade cream cheese glaze, and sliced to show off its swirls.

This Cinnamon Roll Bundt Cake literally takes 5 minutes to prep before it’s popped in the oven, baked, flipped onto a platter, and topped with a rich and creamy from-scratch icing (although you could use the premade frosting that comes in the can).

I’ve taken all of the delicious elements of a Cinnabon cinnamon roll combined with a coffee cake and baked it in a bundt pan to create a delicious Cinnamon Roll Bundt Cake with beautiful curves, complete with an easy-to-make glaze.

Served as a slice instead of a pull-apart pastry, this is the perfect sweet treat for breakfast, brunch, or dessert.

Why We Love This Cinnamon Roll Bundt Cake Recipe

This Cinnamon Roll Bundt cake could be the easiest recipe you’ll ever make! It takes only 5 minutes to assemble the pre-made cinnamon rolls in a pan, then it’s baked it into the most delicious bite of a glazed cinnamon bun, served as a slice.

Can I freeze my Cinnamon Roll Bundt Cake?

Yes, you can freeze this cake without the frosting. Make sure to store it in a freezer-safe container for up to 6 months and then frost the cake once thawed.

Will my cake be lopsided if my cinnamon rolls are sitting uneven on top?

If your cinnamon rolls are lopsided when you take the cake out of the oven, sit a heavy pot lid (like a Dutch Oven) on top of the cake and it will flatten it out. Let it sit like that for 10 minutes before you turn out onto the cooling rack.

How runny should my frosting be?

How much of the frosting should I use?

Reserve some extra frosting to drizzle on each slice of cake when serving.  You can freshen up the frosting with a little 10 second run in the microwave. 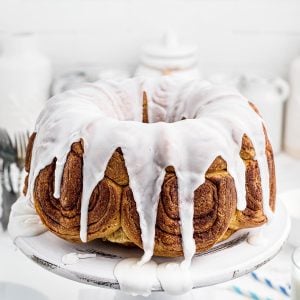 Cinnamon Roll Bundt Cake tastes better than Cinnabon and is super quick and easy to prepare with packaged cinnamon rolls. Make your own icing or simply use the contents in the can!
5 from 1 vote
Print It! Pin It! Save It!Saved!
Prevent your screen from going dark
Prep Time 5 mins
Cook Time 45 mins
Total Time 50 mins
Course Dessert
Cuisine American
Servings 10
Calories 488 kcal

Nutrition information is an estimate. Please utilize your own brand information to double check against our estimates.

Tried this recipe?Let us know how it was!